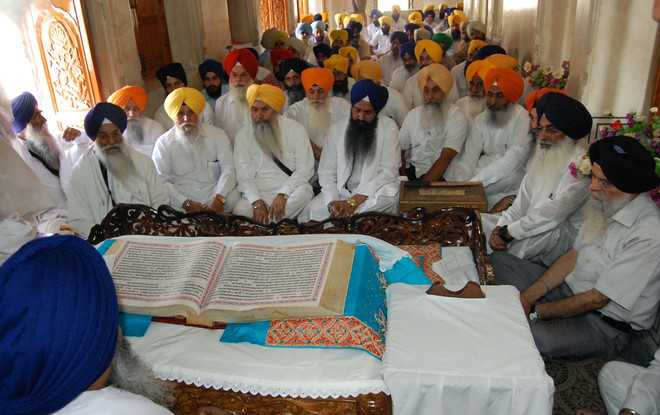 The continuous nonstop recitation of all the verses in the Guru Granth Sahib from the beginning to the end, in 31 Ragas as specified, in all 1430 pages, lasting no more than 48 hours by a team of Granthis and volunteers. This ritual is considered very holy and is said to bring peace and solace to the participants and the passive listeners of the recital. During the reading it is tradition for langar (or communal food) to be available at all times, thus requiring the continual service and dedication of those in whose honor the Akhand Path is being held.

How to book this service

To book a date and time for Akhand Path service at your location, or at the gurdwara, use the Contact Us page to send a message to the SFV Management Committee.

The Path is undertaken in honor of a particular occasion; to mark a happy or sad occasion within the family; or simply to increase one’s feeling of connection to Wahguru. Some of following milestones may call for an Akhand Path depending on the family's circumstances: a birth, a birthday, recovery from a medical operation, a wedding, a death, a graduation, on achieving a goal, for an anniversary or a historic occasion.

It is said that when Guru Gobind Singh had completed the writing of the Guru Granth Sahib, he had five members of the congregation who chanted the completed Granth Sahib to him nonstop, for more than two days and nights. He stood there and listened to the entire Guru Granth Sahib without having any sleep whatsoever. The second Akhand Path was in Nanded after Guru Gobind Singh sent Banda Singh Bahadar to Punjab. The Akhand Pathees were Bhai Gurbaksh Singh, Baba Deep Singh, Bhai Dharam Singh (of Panj Piaray), Bhai Santokh Singh, and Bhai Hari Singh. Before giving the Guruship to the Guru Granth Sahib (then called the Adi Granth) the Guru held this Akhand Path and then proclaimed the Adi Granth as the perpetual Guru of the Sikhs.

Following this example, the Sikhs started the tradition of dedicating Akhand Paths to various activities. Before battles, the Sikhs would listen to an Akhand Path and then prepare for battle. In 1742, when Sikhs were in the jungles of Punjab, one Sikh woman warrior named Bibi Sundari, requested just before she died (due to the wounds inflicted in battle,) to have an Akhand Path arranged for her. She lay there next to the Guru Granth Sahib and listened to the full recitation of Path. After kirtan, Ardas and Hukam, she received the Karah Prashad, uttered "Waheguru ji ka Khalsa, Waheguru ji ki Fateh" breathing her last. Thus, began the tradition of rendering an Akhand Path within 48 hours.

It is now the tradition to recite the Akhand Path in Gurmukhi, and it must be completed within 48 hours. During an Akhand Path, if a Hukam is taken at the end of a program, the Pathee reads the Gurbani that they have arrived at in the regular course of reading. In this case, the first and last two lines are not repeated. When the Pathee reaches the end of the Hukam, they continue in the reading of the Akhand Path.